Just picked this guy up today at a local TRU. Looks pretty nice and I kind of dig Bruce Campbell movies so look forward to a video review soon.


Update 3/31/12: So I decided to open the figure to check it out and it was missing a left hand. Clearly it is shown in the picture above but at the time of opening, I didn't see it and never thought to refer to the picture above to see if it originally came with one. Originally I had complained about it missing but then I painfully found the hand in my shoe when I went to wear it. However, when I was "messing" with it, the elbow snapped really easily. I was bummed out. I really wanted to like this figure. So I had to go out and get another which turned out fine. Video review is finally done so check it out.

Posted by Chachipower at 6:37 PM No comments:

Today i painted a part i left unpainted yesterday so it looks better. I also made up some decals today and applied them. They are clear decals so there was no need to color match. The final touch will be the clear coat. Then i could start weathering. 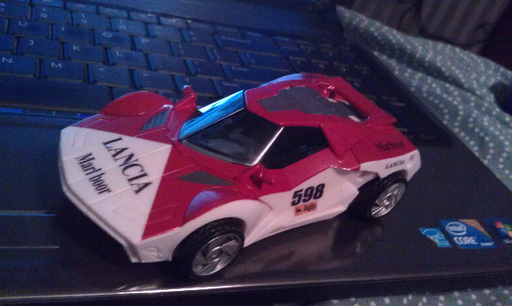 Here's a video update of the Wheeljack.

Posted by Chachipower at 8:48 PM No comments:

I was in the mood to take a stab at another custom. Im a bit lazy when it comes to customs. But when i do them, i want them to come out nice. I also like it when i can finish them in the little time I have. That is why I took this project on.
Ive always liked the incredibly rare Marlboor Stratos Diaclobe figure which Wheeljack is based off of. I decided that I would use an RID Wheeljack for this and as of right now I believe its the first of its kind.
I started by sanding the entire figure in car form to get rid of the factory paint apps. Then I scuffed the entire body of the car. Next was taking the figure apart, masking the bits I dont want painted and carefully working the edges of the tape where the red paint will be applied.
Next, after all masking was done, I misted some primer to get a little tack on the coating. Then quickly followed by a mist coat of red paint. After a minute, i applied another coat amd then another etc until i got an even red.
After paint was dried, i removed the masking tape carefully as to not damage the paint edges of the graphics. After that was done,  I assembled the figure to see what it looked like. This way I could see where any stray paint ended up so I could clean it later. The figure is still far from complete as there will be more paint detailing, weathering and decals will have to be made. The decals are make or break so I will be using water transfer decals. And the cherry on top will be a thick glossy clear coat to seal the decals and make this thing shine! Stay tuned for more. 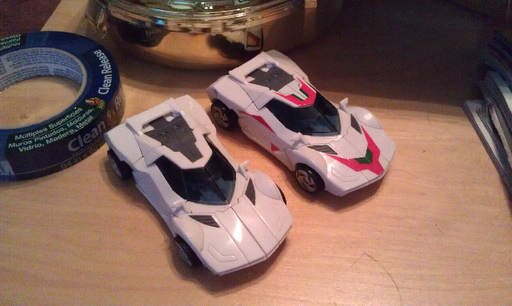 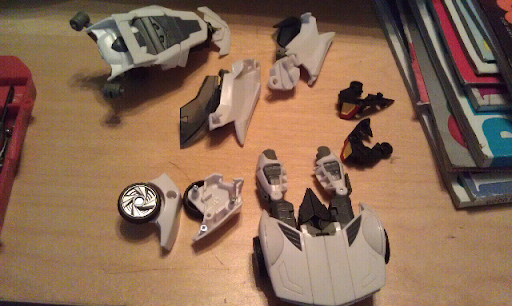 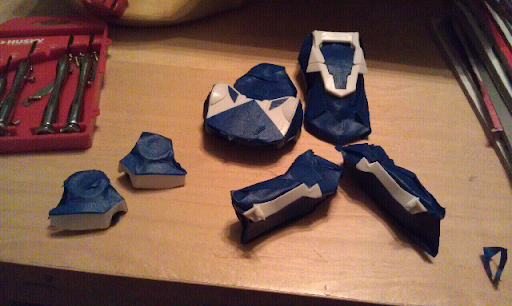 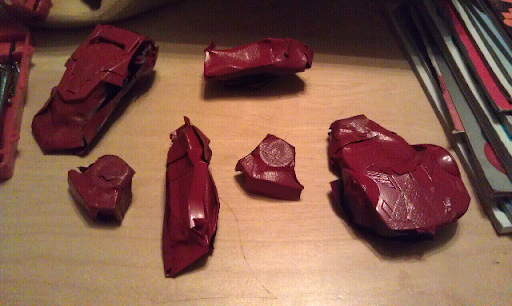 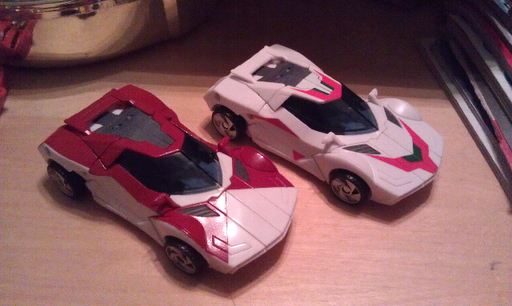 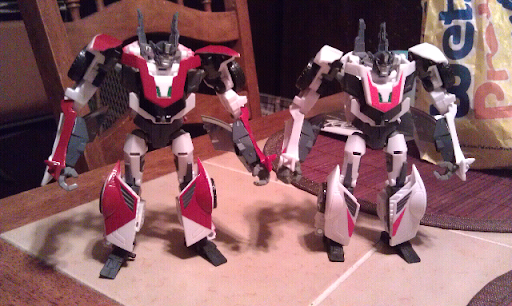 Posted by Chachipower at 10:13 PM No comments:

This is my third Vulcan figure. One i got just to get, another i got so i can restore it, and this one i got because IT HAS FISTS. This is the newest member to the Rocket Punch Army. Review on my youtube RPA channel coming soon. 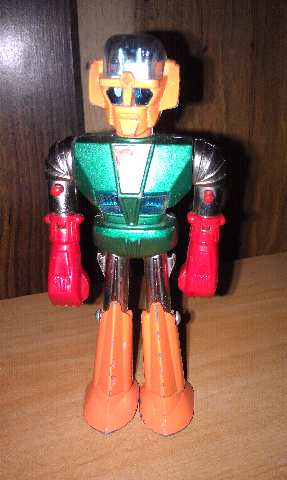 Posted by Chachipower at 7:00 PM No comments:

I recently posted a video comparing the new Mattel Voltron offering to other 3 3/4 offerings out there. Of course I hqd lots of stuff to say about it negatively. I basically made fun of it and pointed out how cheesy the gimmicks are but at the end of the day, its a gigantic modern Voltron! I still have my complaints but I dont regret buying it at all. Check out my video below. 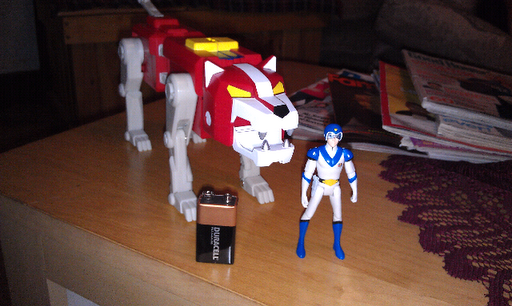 Posted by Chachipower at 9:04 PM 2 comments:

Its not the japanese version but it will have to do because my money is tied up in other robot things and jumbos take a back seat. This one however was hard to pass up. I found it at a flea market for 90 bucks. The guy lowered it to 80 but wouldnt let me take it for 70. So i left a bit bummed. Its only ten bucks but still. My wife saw i really wanted it so she went  back with my cousin and they sweet talked the guy into leaving it at 75 which is an excellent price i think. Its in great shape too. No box but no matter, he looks great with my other modern jumbo. 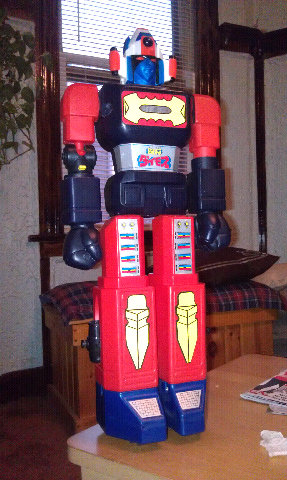 So i reluctantly took my wife to the dollar store and i was thinking to myself there better be something so horribly/cool to make up for it. Aside from some electric shock toys i picked up, I found some Masked Rider knockoffs. They are so ugly they are cool. Check out the review on Youtube for the Rider toy on my rocketpuncharmy channel and check out out my chachipower channel for the "shockolate" video. Fun stuff 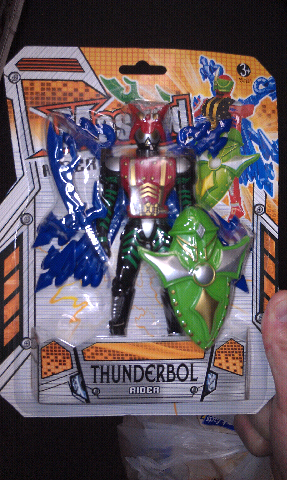 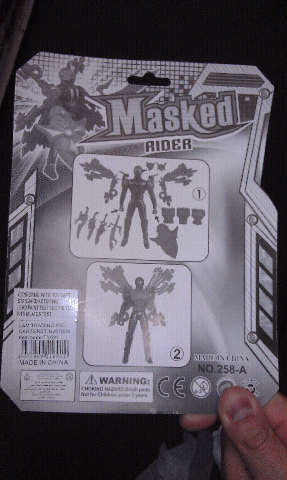 Posted by Chachipower at 8:55 PM No comments:

Ok so I found him like two weeks ago but I havent posted in forever here. I had exhausted all TRU stores, all they had were Bumblebees. So I decided to give Kmart a try cause really, who shops there anymore? But lo and behold the two stores i checked out both had one Soundwave! They were stocked with everything else too. Give your local Kmart a shot even though they can suck sometimes (speaking about prior online order fiascos...yes plural) best of all they are $12.99 there which is the cheapest so far. Good luck 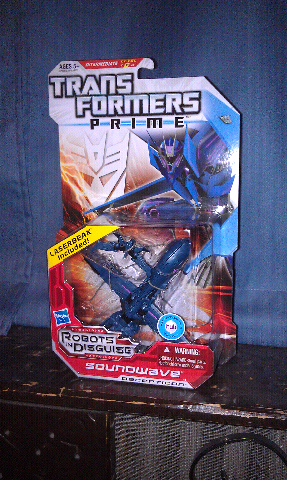 Posted by Chachipower at 8:50 PM No comments:

I happened to be searching for some new Godzilla vinyl and I found the new Tokyo vinyls. I was at the checkout with just Mechagodzilla because I decided to hold off on Godzilla for a later time. Then I had second thoughts because those decisions always go wrong for me. Stay tuned for a review on those soon. 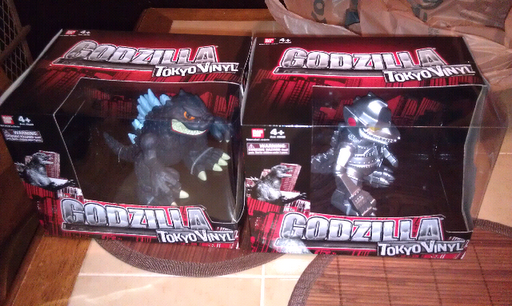 Posted by Chachipower at 8:44 PM No comments: