Ahh, there is nothing like a good ol' 80's Taiwan bootleg. Not all 80's Taiwan bootlegs were good, but many that were copies of existing Japanese toys. I'm sure we've all had some type of Taiwan version toy. One of my favorites is Daitarn 3 which borders on not really being a bootleg since it's licensed by Sunrise. We've also got the Godtron, Godbot, Lionbot and loads more. One that I would see as a kid was Cassette Man. I remember seeing these alongside Shockwave and Megatron bootlegs. I wasn't into them much because these were available before the Transformers craze started. The reason Transformers bootlegs were available before Transformers existed is because they weren;t bootlegged off of Transformers. They were bootlegs of Diaclone/Micro Change toys from Takara Japan and other toys. Sort of like how Lionbot was around before the Matchbox Voltron came out. This all cause me confusion since there was no internet to teach me the origins of these toys.

Years later I now have in my possession a Taiwan Cassette Man. I got it on eBay where it was being sold for about $130 with a "Make offer" I went the lowball route since I was broke and this is a bootleg...the offer was accepted. Worst that could happen is my offer being declined. It is bootlegged off of the Takara Micro Change Cassette Man. The box has seen better days and the Jaguar cassette robot is missing but the rest of the contents have been unmolested by small grubby hands. I made a video of this figure in which I transformed it for the first time in it's life. Although I didn't capture the transformation on video, you sort of witness the devirginizing of a toy. 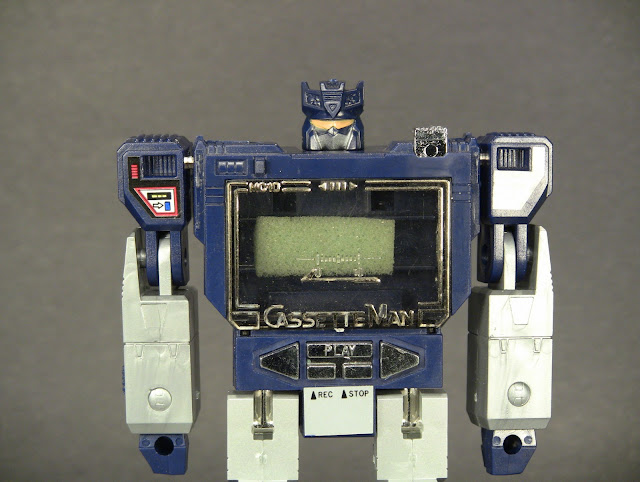 One of my stops in Colombia was a new mall that was recently constructed. It is a big mall even by USA standards, loaded to the brim with really cool stores and a big food court. One of the stores which happened to grab my attention was VIP Toys. I knew I'd like it the second I saw a jumbo Mazinger Z vinyl in the entrance. They were kind enough to let me take photos. Let's take a look at what they offer. 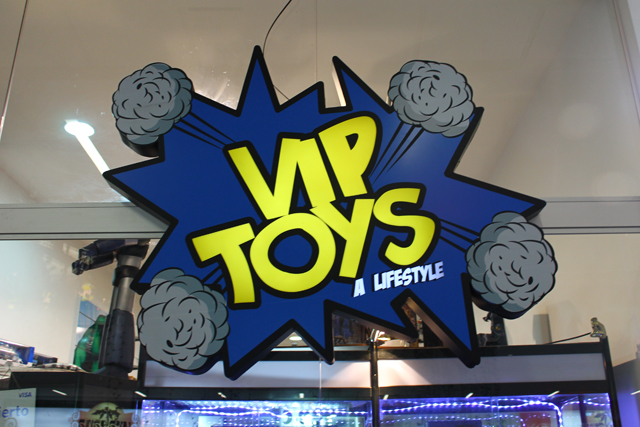 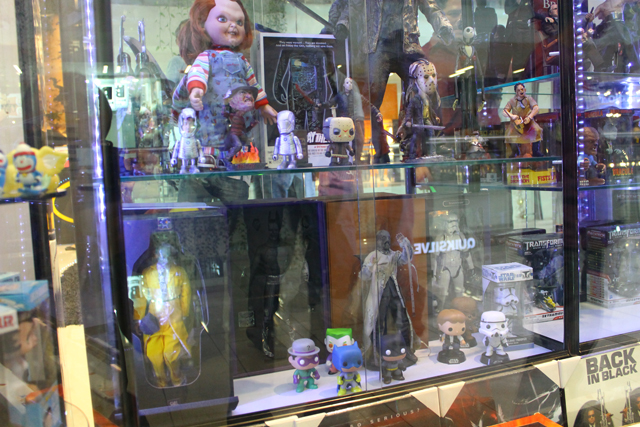 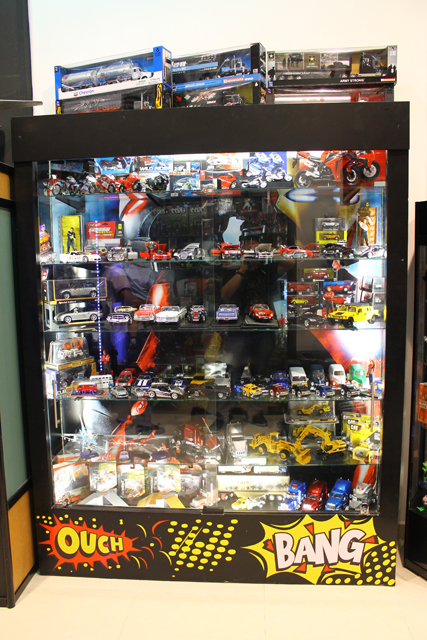 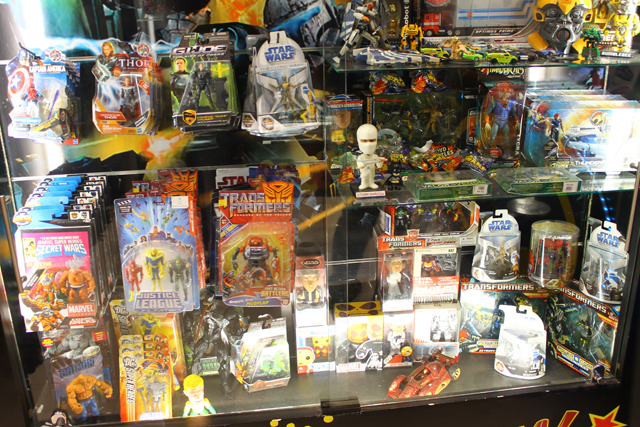 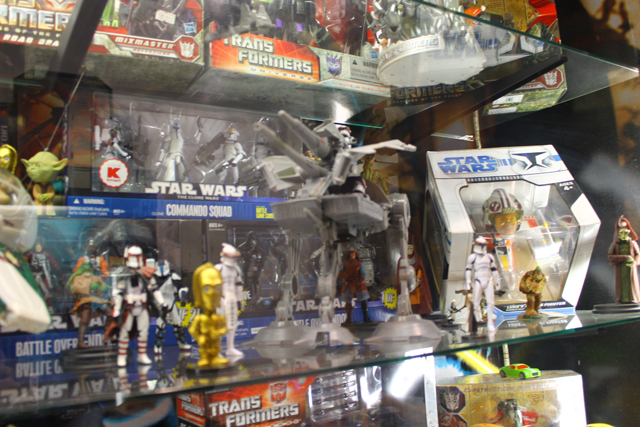 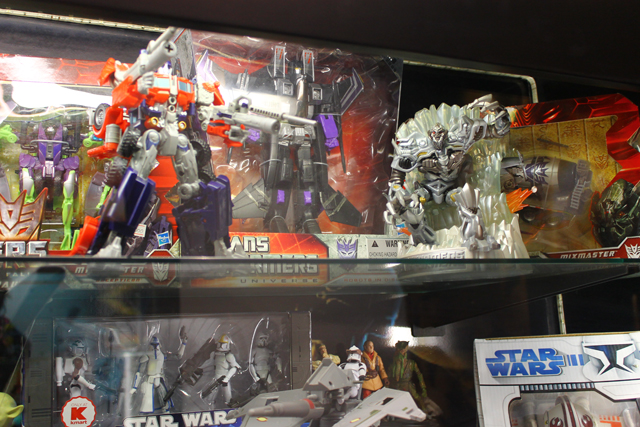 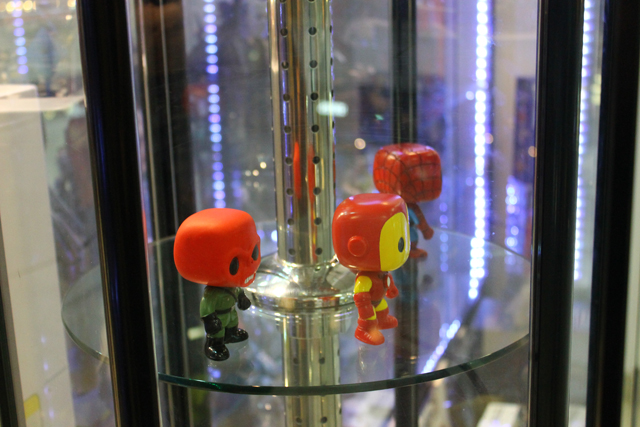 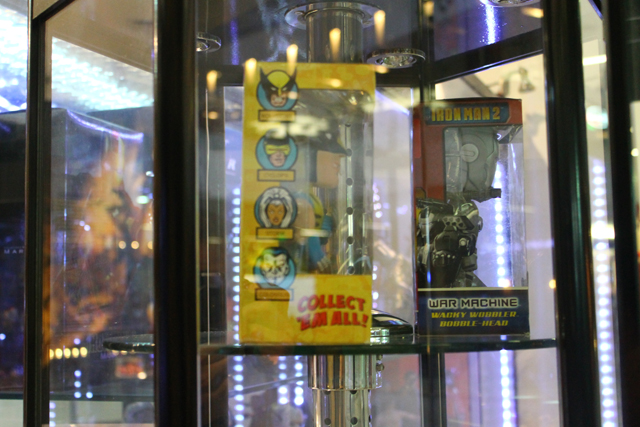 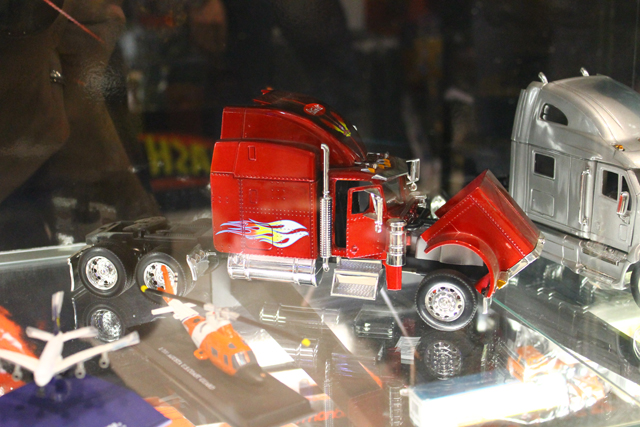 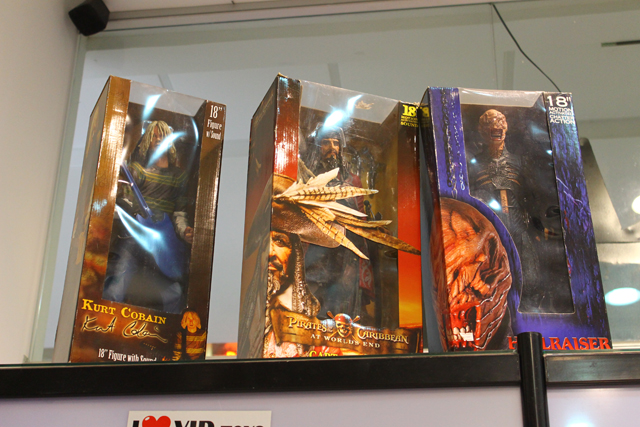 I have to say this was one of the nicest high end toy stores I've had the pleasure of visiting. The passion they have for these toys shows. I mean, even little toys we normally take for granted here were important enough to display. And speaking of displays, I want display cases just like these! They were all well-lit and organized. Did you notice the comic sound effect words on the bottom of some of them? Awesome. If for some reason you find yourself in Medellin, make sure you check em out. VIP Toys.
Posted by Chachipower at 11:19 PM No comments:

Is there such a thing as too much?

Is there such a thing as too much when it comes to collecting? Lately, I feel like I am coming to a point where I am becoming overwhelmed. I get lots of people tell me how awesome it is to have so much stuff coming in. Well, the thing is, yeah of course it's awesome, but some part of me feels differently. I'll explain why. There are a couple of reasons. I have had to shrink my display area to make room for my baby daughter. This meant stashing away some of my collection. This meant deciding what I REALLY wanted to keep out. Well little by little my displays started to get overcrowded with new stuff. Some stuff even started overlapping with other stuff. I mean I have a phone Braver 7 standing next to a Scopedog! Some old stuff I don't wanna put away and some new stuff I absolutely have to display. Today I got fed up and started rearranging stuff. My main display consists of 3 Ikea Detolfs which I had side by side. Now only two are together and one stands off to the corner. I noticed they were a tad overcrowded and by that I mean they were very crowded. I had already put away some cool stuff like the SOC Baikanfu and Tobikage stuff so I didnt know what else to put away. My Daitarns have to stay, My Daltanious's, my Voltrons etc. Where can I trim some fat? It's like having to choose a favorite child to keep and the others to give away to an orphanage. Then I realized I have a few little vintage toys still in their boxes taking up a bit of space inside the display cases. I like them there because the boxes have a lot of charm. Today they had to go. 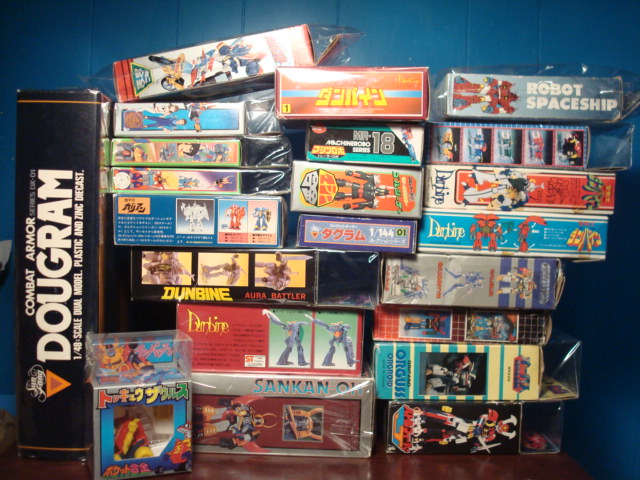 I managed to clear out a bunch of little boxes that ate up a lot of space. Most of these are not must-display items, but I absolutely love the box art. Unfortunately, it was time for them to move on until I get more display space (in other words, new house).

Off to storage they went. I shed a teeny tear, sort of like the indian dude in the old 80's commercials when someone tosses garbage on the floor. I stuffed them carefully in a box and they are now awaiting a slumber of an unknown length. 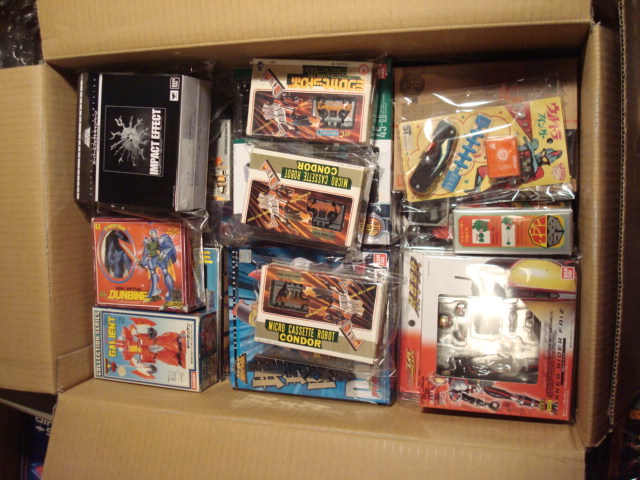 Aside from just not having the space to display, I am finding it harder and harder to keep up with this blog and my youtube channel. My goal was to do a small write up, not necessarily a review of all the things that come my way, but it is getting harder and harder to keep up. Some really cool stuff gets overlooked by some so-so stuff just because the cool stuff may not be available to me at the moment. The rest lies in boxes "in queue". Some may never even see the light of day. Not only on this site but ever. What I mean is that if I don't open up my stuff while it comes in to check it out, it usually gets pushed off to the side while other things come in, eventually it gets to be so much that I have to box it and store it. Those items never get opened and the write ups never surface. Of course CDX stuff takes priority since at the moment, this blog is purely "for fun". I always take care of those items first.

This is what my queue room looks like as of this afternoon. That is only what I haven't stored away yet.
In the future, I will have to carefully trim out excess stuff that I don't need so that I can concentrate more on getting cool new stuff up. I've been feeling like a lot of my recent stuff has been rushed or done without the enthusiasm I shared in the past. Well, I do have a baby now, but I miss the days of opening a box, admiring the item, taking my time with it and doing a video review of it with special effects and stuff. Now, I'm opening, wiggling arms and legs videotaping it and boxing it away. Boo. Most of this backup was due to my 2 week vacation but I want to have fun with my hobby, not box it up for a rainy day which may never come. If one good thing comes out of this it would have to be the occasional visit to the storage room where I say "Oooh I forgot I had this!" Once in a while when that happens I grab that item to show you guys. It keeps things fresh and interesting. I've cut a few things out of my preorders so I don't get attacked all at once with stuff. We'll see how that goes. Maybe I will have to hire some writers...or give my little daughter a crash course in robot/figure collecting.
Posted by Chachipower at 10:54 PM 1 comment:

During my vacation to Colombia, I hit up a store called "Importados" that sells mostly Japanese themed stuff mixed in with other pop culture stuff. Sometimes they have some nice vinyls. I noticed they has a 2 for 1 sale so I grabbed a questionably licensed Ben 10 PVC figure for a little cousin of mine and that in turn set me up to pick something out for myself. My favorite of the lot was this Charle brown. I loved the sculpt and it was a nice size so it was to be mine. I also managed to pick up a small baby Super Mario vinyl from a little shop called Kimango which also sold imported toys. 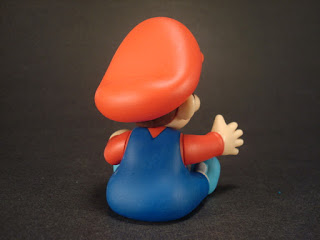 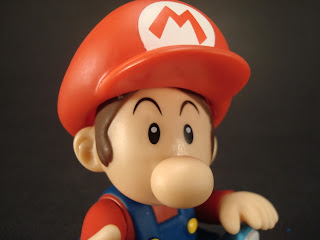 I will have to get someone in my family to pick up baby Luigi for me since I am back in the states now. I don't know the manufacturer of this little vinyl, but it is licensed by Nintendo. This little $5 figure paved the way towards a purchase of a brand new black Super Mario Nintendo Wii for my wife for Christmas... only to later find out a new Wii lurks near with HD capability. Hopefully she won't notice the non HD gaming.
Posted by Chachipower at 9:21 PM No comments:

Toy Sighting: Reveal the Shield Grapple and Lugnut Voyager figures for $9.99 at TJ-Maxx

I love hitting up these discount stores and unexpectedly finding some great stuff. This time around I went in  to look for baby stuff and ran into these RTS voyagers I have been waiting forever for and never saw anywhere. Funny how I've never seen these in toy stores, yet they already been relegated to deep discount stores. What's up with your distro Hasbro? I found Grapple and Lugnut in great shape and for a great price. $9.99 each. That's cheaper than a deluxe. They had another voyager fig that I had no interest in. I went back to get my friend a Lugnut and unfortunately, someone else had snatched them up. Maybe one of you guys may be lucky enough to find these at your local TJ-Maxx. 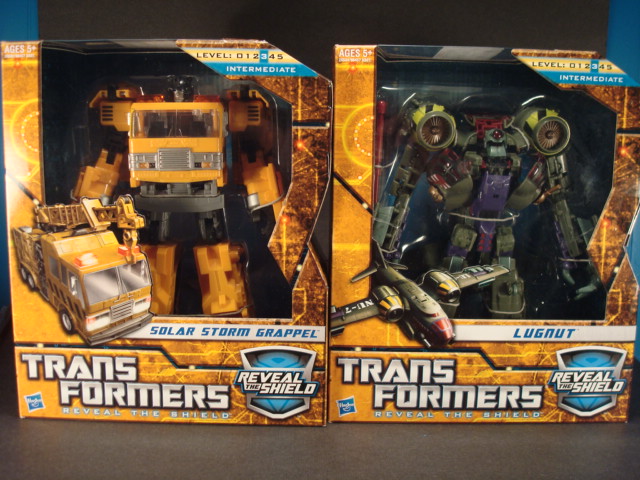 Posted by Chachipower at 9:15 PM No comments: